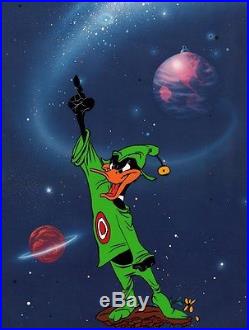 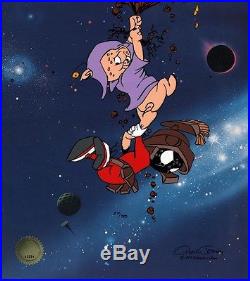 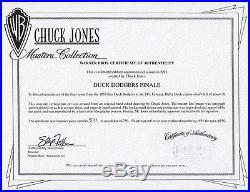 Comic Mint is the Premiere Gallery for Pop-Culture Collectibles. Specialists of Simpsons Animation Art since 1993, as well as other rare animation, and a magnificent selection of original comic book artwork by some of the world’s leading artists! “Duck Dodgers Finale ” (1993). Hand Painted Limited Edition Cel Signed by Chuck Jones. Comic Mint, is pleased to offer CHUCK JONES fans this unique piece of animation art history featuring the climactic conclusion to Chuck Jones masterpiece Duck Dodgers in the 24th 1/2 Century. This famous limited edition cel is entitled: “Duck Dodgers Finale”, and this scene is Chuck Jones’ interpretation of the final scene from his classic cartoon. In an effort to claim Planet X in the name of Earth or Mars, Daffy and Marvin Martian blow the planet up to just this little scrap by the end of the cartoon. This large vertical pan cel captures the fun and silliness of a great classic cartoon. The cel is hand signed by Chuck Jones (September 21, 1912 February 22, 2002). The artwork is comprised of a single hand painted cel placed against a photographic background, with an image area measuring 13.5″ x 33″ inches (unframed). The cel also comes custom matted with 100% acid-free matts, ready to be inserted into a frame. The cel has the official Linda Jones gold seal (lower corner), and is accompanied with the official certificate of authenticity. We are an AUTHORIZED Studio Gallery! All sales are final. The item “DUCK DODGERS FINALE Huge Pan Cel VERY RARE CHUCK JONES signed WARNER BROTHERS” is in sale since Saturday, August 19, 2017. This item is in the category “Collectibles\Animation Art & Characters\Animation Art\Production Art”. The seller is “comic-mint” and is located in Burbank, California. This item can be shipped worldwide.