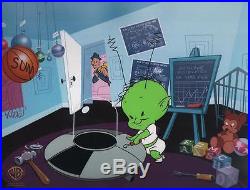 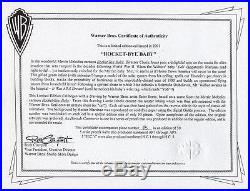 Comic Mint is the Premiere Gallery for Pop-Culture Collectibles. Specialists of Simpsons Animation Art since 1993, as well as other rare animation, and a magnificent selection of original comic book artwork by some of the world’s leading artists! Hand Painted Limited Edition Cel Directed by Chuck Jones Comic Mint, is pleased to offer fans of CHUCK JONES’ cult-classic cartoon “Rocket-Bye Baby” this unique piece of animation art. In this wonderful Merrie Melodies cartoon, Director Chuck Jones puts a delightful spin on the mania for alien invasion that was rampant in the decades following World War 2. When the Wilburs’ baby “Yob” apparently Martians read right-to-left… Is inadvertently switched for the Martian baby “Mot”, it seems as if Home Town America will never be the same! This gifted green infant with antennae! Hangs a model of the solar system from his ceiling, spells out Einstein’s pet theory in building blocks, tracks the probability of hurricanes in the improbably-distant year of 1985 and builds an operational flying saucer from household items! Following a spirited chase in which Mot debunks a Scientific Disbeliever, Mr. Wilbur awakes in the hospital… It was All A Dream! Until he notices his baby’s wrist tag, which reads “Yob”!!! This limited edition cel began with an original drawing by Warner Bros. Artist Scott Seeto, based on a scene from the Merrie Melodies cartoon “Rocket-Bye Baby”. The master line image was silk-screened onto a clear acetate sheet (or “cel”). The cel was also silkscreened with the Warner Brothers gold seal. The cel was then expertly hand painted on the reverse side, bringing the characters to life with color. The original background by Hector Martinez was reproduced on acid-free paper using the digital Giclee process. The final step is the hand inking of the edition number on each cel. In an edition of only 50 pieces worldwide. The artwork measures 13″ x 11″ inches and the artwork is in excellent condition. It is beautifully matted for framing, and is accompanied with the official studio certificate of authenticity. We are an AUTHORIZED Studio Gallery! All sales are final. The item “BABY YOB Rocket-Bye Baby RARE Warners Ltd Ed CEL Directed by CHUCK JONES” is in sale since Sunday, July 29, 2018. This item is in the category “Collectibles\Animation Art & Characters\Animation Art\Limited Editions”. The seller is “comic-mint” and is located in Burbank, California. This item can be shipped worldwide.