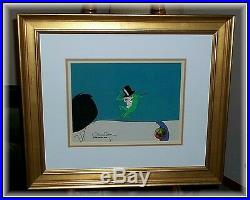 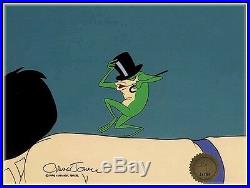 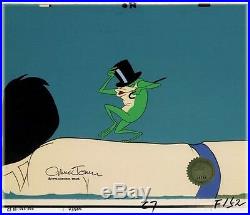 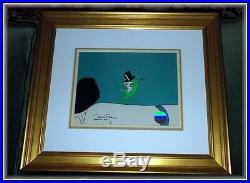 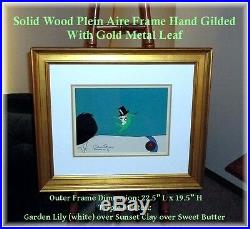 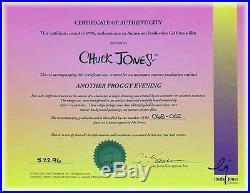 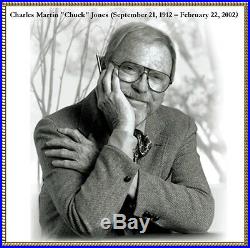 Extremely Scarce Warner Bros. Hand-Inked, Hand-Painted Production Animation Cel of. Full figure with C. Hand-Signed by the Late Animation Legend. One of the Rarest, Most Sought After True Production Animation Cels. Centered, Full Figure and Signed with C. Outside of cameo appearances, Michigan J. Frog has only appeared in two cartoons, adding to the extreme rarity. Original art hand-signed by true, recognized studio legends has been shown to increase in value over time. Art has emerged as a new asset class for any well-diversified portfolio. Another Froggy Evening (1995) original production animation cel painting + photographic color background print gouache on untrimmed animation cel sheet, 3.5″ x 4.25″ cel image. This lively original hand-painted animation cel of Michigan J. Frog was created and photographed during the making of the 1995 animated cartoon directed by Chuck Jones. The director’s famous character first appeared in the classic Merrie Melodies cartoon One Froggy Evening (1955). The sequel tells the story from prehistoric times into the future as the hapless fellow discovers the singing frog, envisions untold riches from exhibiting the talented amphibian, yet is frustrated when he will not perform on cue. This cel is from the sequence in which Michigan J. Frog sings “The Michigan Rag, ” a song written for the 1955 cartoon by Michael Maltese and Chuck Jones, upon his discovery in Roman times. Is written below his signature. The COA attests it is hand-signed by Chuck Jones on the line directly under the hand written numbers 068-002. The cel is set over an 11″ x 14″ photographic color print of the matching background from the film; further bears Linda Jones Ent. Seal at lower right, and the Certificate of Authenticity issued with the cel in 1996 by Linda Jones Enterprises is included. Studio notation “C7 F152″ is written along the bottom of the sheet to mark the cel’s place in the film. Frog is an animated cartoon character who debuted in the Merrie Melodies cartoon One Froggy Evening (December 31, 1955), written by Michael Maltese and directed by Chuck Jones. In this cartoon, Michigan is a male frog who wears a top hat, carries a cane, sings pop music, ragtime and Tin Pan Alley hits, and other songs from the late 19th and early 20th century while dancing and performing acrobatics in the style of early 20th century vaudeville. He appeared in a later cartoon titled Another Froggy Evening which was released on October 6, 1995. Michigan has made cameos in episodes of Tiny Toon Adventures, Animaniacs, The Sylvester and Tweety Mysteries, Detention (as a newt that still has much of his original features, like the top hat and cane and green outside with yellow inside), more recently, as a talent show emcee in Duck Dodgers, Will and Dewitt (almost identical to his original appearance, but pink instead of green and has a kind of knit-style hat instead of a top hat), and as a statue in Baby Looney Tunes. Frame: Solid Wood Plein Aire with Hand-Gilded Gold Metal Leaf. Outer Frame Dimensions: 19.5″ x 22.5″. Inner Frame Dimensions: 16″ x 19″. Cel Opening: 9″ x 12″. Matting: Triple Matted – Garden Lily White over Sunset Clay over Sweet Butter. Hangers: D Rings with Wire (installed and frame is ready to hang). From Linda Jones Enterprises. Framed cels are corner blocked, bubble wrapped and additionally covered in either rigid foam board or rigid cardboard. NOTE: ALL of our framed cels, watercolors, signed books are. Photos are always of the actual item being auctioned. Pay for it in the evening and it goes out the next day. Your feedback cheerfully matched same day posted. The item “Framed, Chuck Jones SIGNED, Michigan J Frog RARE PRODUCTION Animation Cel withCOA” is in sale since Wednesday, January 2, 2019. This item is in the category “Collectibles\Animation Art & Characters\Animation Art\Production Art”. The seller is “fashiontime” and is located in Uniontown, Ohio. This item can be shipped worldwide.