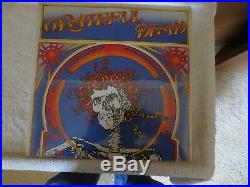 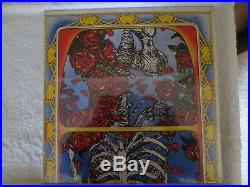 Grateful Dead is an album by rock band the Grateful Dead. Released in October 1971 on Warner Bros Records, it is their second live double album. Although published without a title, it is generally known by the names Skull and Roses (due to its iconic cover art) and Skull Fuck (the name the band originally wanted to give to the album, which was rejected by the record company). Unlike Live Dead, the album contained several lead and background vocal overdubs. For the three new original compositions (“Bertha”, “Playing in the Band”, and “Wharf Rat”), the band invited Jerry Garcia associate Merl Sanders to overdub organ parts. This made the organ playing of Saunders more prominent than that of Pigpen, whose contributions tend to be buried in the mix. “Playing in the Band” received a good amount of airplay, and became one of the Dead’s most played songs in concert (a studio version was released the following year on rhythm guitarist Bob Weir’s solo album Ace). The closing segue of “Not fade Away” into “Goin’ Down The Road Feeling Bad” also received airplay and became a fan favorite. The album’s cover art, composed by Alton Kelly and Stanley Mouse, is based on an illustration by Edmond Sullivan for an old edition of the Rubaiyat Kyayyam. Though the album has been known by the sobriquet “Skull & Roses”, the original vertical gatefold cover unfolds to reveal the entire skeleton. The graphic became one of the images most associated with the band. Opening track “Bertha” fades in on the original version of the album, in semblance of entering the performance space. A longer, full opening is used on CD/digital copies. More tracks from the same source concerts were later released on Ladies and Gentlementhe Grateful Dead. The 7 single release of Johnny B. Goode (a split single with Elvin Bishop) was actually the version from the album Fillmore the Last Days. However, the version from this album was later used as a B-side on the re-release of the “Truckin” single. The album was remastered and expanded for the 2001 box set The Golden Road. This version, with three bonus tracks (two contemporaneous live tracks and a hidden promotional track) and the extended “Bertha”, was released separately, in 2003. Drummer Bill Kreutzmann explained the lack of a title on the artwork and labels. The original name was going to be “Skull Fuck”. This was a time long before rap. Artists like Eminem numbed concerned citizens to the idea of offensive language in. Warner Bros freaked out on us. They said stores would boycott it and we. Wouldnt be able to get it on shelves. When the band submitted “Skull Fuck” a. Contemporary euphemism for “blow your mind” as the album title, it was rejected by the. Ultimately the agreement was made that the album would be published. Without the title appearing anywhere on the record labels or cover artwork. Band refers to the album by this title, and it has long been known to fans through. Interviews with band members, the Deadhead network and other outlets, the alternate. Descriptive title “Skull & Roses” developed among distributors, music buyers and. Reviewers as a graphic incipit from the cover artwork. “Bertha” (Garcia & Hunter). “Mama Tried” (Merle Haggard). “Big Railroad Blues” (Noah Lewis). “Playing in the Band” (Hunter and Weir). “The Other One” (Krautzmann and Weir). “Me and My Uncle” (John Phillips). “Big Boss Man” (dixon and Al Smith). “Me and Bobby Megee” (Fred Foster and Kris Kristopherson). “Johnny B Goode” (Chuck Berry). “Wharf Rat” (Garcia and Hunter). “Not Fade Away /Goin’ Down the Road Feeling Bad” (Buddy Holly and Norman Petty /traditional). The item “Grateful Dead Rare 1971 Skull and Roses Live Album 1st Press Dbl Vinyl LP/Sealed” is in sale since Saturday, March 30, 2019. This item is in the category “Music\Records”. The seller is “mikez1031″ and is located in Clinton Township, Michigan. This item can be shipped to United States, Canada, United Kingdom, Denmark, Romania, Slovakia, Bulgaria, Czech republic, Finland, Hungary, Latvia, Lithuania, Malta, Estonia, Australia, Greece, Portugal, Cyprus, Slovenia, Japan, China, Sweden, South Korea, Indonesia, Taiwan, South africa, Thailand, Belgium, France, Hong Kong, Ireland, Netherlands, Poland, Spain, Italy, Germany, Austria, Bahamas, Israel, Mexico, New Zealand, Philippines, Singapore, Switzerland, Norway, Saudi arabia, Ukraine, United arab emirates, Qatar, Kuwait, Bahrain, Croatia, Malaysia, Brazil, Chile, Colombia, Costa rica, Panama, Trinidad and tobago, Guatemala, Honduras, Jamaica, Antigua and barbuda, Aruba, Belize, Dominica, Grenada, Saint kitts and nevis, Saint lucia, Montserrat, Turks and caicos islands, Barbados, Bangladesh, Bermuda, Brunei darussalam, Bolivia, Ecuador, Egypt, French guiana, Guernsey, Gibraltar, Guadeloupe, Iceland, Jersey, Jordan, Cambodia, Cayman islands, Liechtenstein, Sri lanka, Luxembourg, Monaco, Macao, Martinique, Maldives, Nicaragua, Oman, Peru, Pakistan, Paraguay, Reunion, Viet nam, Uruguay, Russian federation.