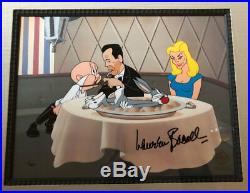 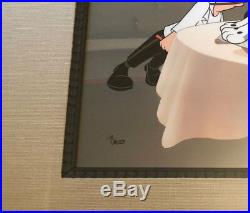 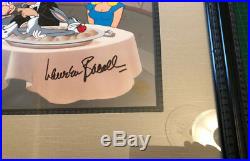 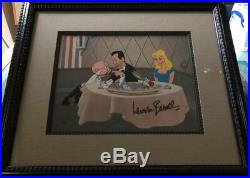 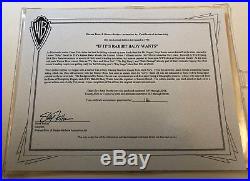 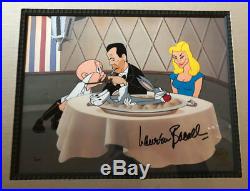 As Mocrumbo waiter Elmer Fudd takes the heat for failing to round up some fried rab bit for Mr. Bogart, Bugs Bunny serves himself as the main course for Lauren “Baby” Bacall in “If it’s Rabbit Baby Wants”, the limited edition cel based on the 1947 Merrie Melodies cartoon “Slick Hare”. Directed by Friz Freleng, “Slick Hare” features cartoons of several of Hollywood’s’s leading celebrities, but none as popular in those post-WWII days as Bogie and Bacall. This limited edition cel began with a Darrell Van Citters drawing based on images from Slick Hare. From this drawing Laurie Dindis created the master inking which was then silk-screened with the Warner Bros. Seal onto an acetate sheet (or “cel”). Each cel was ink-enhanced by hand before being hand-painted on the reverse side. The background by Ruben Chavez was reproduced on acid-free paper using a lithography process. Along with approval from the Estate of Humphrey Bogart, each “If it’s Rabbit Baby Wants” bears the signature of Lauren Bacall. The artwork measures 16″ x 19″ inches (beautifully matted), the cel has the official Warner Brothers Studio gold seal (lower corner), and is accompanied with the official certificate of authenticity. If you wish to add a unique piece to your collection, this is the one for you. The item “RARE Warner Bros Cel IF IT’S RABBIT BABY WANTS Signed by LAUREN BACALL” is in sale since Monday, April 15, 2019. This item is in the category “Collectibles\Animation Art & Characters\Animation Art\Limited Editions”. The seller is “comic-mint” and is located in Burbank, California. This item can be shipped worldwide.