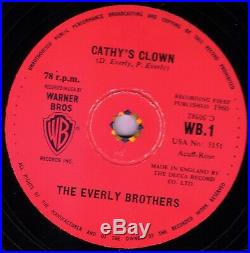 A R N E R B R O T H E R S RECORD! B/w ALWAYS IT’S YOU. Cathy’s Clown is a popular song, written and recorded by The Everly Brothers. It was their first single for Warner Bros. After spending three years on Archie Bleyer’s Cadence label. Billboard Hot 100 chart and one week on the R&B charts. “Cathy’s Clown” spent seven weeks at number one in the UK in May and June 1960. It would become the Everly Brothers’ biggest hit single and their Second number one. The song is ranked number 149 on the Rolling Stone magazine’s list of The 500 Greatest Songs of All Time. It was the first of only three Warner Brothers 78s EVER released in the UK and is incredibly rare. (the others being the Everly Brothers “Lucille” and Sammy Masters “Rocking Red Wing”). WARNER BROTHERS WB1 10 78rpm shellac. A SIDE : CATHY’S CLOWN. B SIDE: ALWAYS IT’S YOU. CONDITION – E / E. THIS IS A MEGA RARE RECORD! 10 78 RPM RECORDS NEED CAREFULLY PACKING, AND I CLAIM TO HAVE THE BEST PACKAGING IN THE WORLD FOR DISPATCHING THEM! THE GREG’S GREAT’S SYSTEM CONSISTS OF A SPECIALLY DESIGNED INNER BOX MADE OUT OF 1 THICK POLYSTYRENE, WHICH THEN GOES INSIDE A DOUBLE CORRUGATED STIFF OUTER CARDBOARD CARTON. THE BOXES CAN TAKE UP TO 21 RECORDS. I SEND OUT ON AVERAGE ABOUT 30 PARCELS A WEEK AND I ONLY PROMISE A TEN DAY DISPATCH. POST IS NORMALLY DONE ONCE A WEEK. The item “MEGA RARE 1960 UK #1 THE EVERLY BROTHERS 78 CATHY’S CLOWN WARNER BROTHERS WB1 E” is in sale since Tuesday, March 24, 2020. This item is in the category “Music\Records”. The seller is “gregsgreats” and is located in Cambridge. This item can be shipped worldwide.