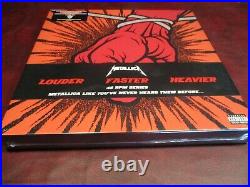 ANGER AUDIOPHILE LIMITED EDITION 180 GRAM 45 SPEED FOUR LP BOX SET – NOW OUT OF PRINT AND TREMENDOUSLY RARE AND VALUABLE COLLECTORS SET. Of course cutting at 45 speed is the audiophile choice for the highest quality. ANGER 180 GRAM 45 SPEED FOUR LP BOX SET. A 45-RPM record is sonically superior to a 33 1/3 variety because of a 35 percent reduction of groove curvature compared to a 33 1/3 cut.. It means that while you can’t fit as much music into a 45, the undukations of the groove that your cartridge has to track are stretched over a longer distance. For these reissues, the music was displaced onto two sides, meaning each side contains about 10+ minutes of music. The only way you’ll get closer to this classic music is to listen to the master tapes or have been in the studio with the artist originally during the actual session. Deluxe Audiophile Quality 45rpm 180 Gram Vinyl Box Set! Cut at Bernie Grundman Mastering Studios on 45rpm from the Original Analog Master Tapes! Their First All-New Studio Album Since 1997! Metallica is one of the best, most influential heavy metal band of the’80s. Responsible for bringing the genre back to Earth, the bandmates looked and talked like they were from the street, shunning the usual rockstar games of metal musicians during the early’80s. They expanded the limits of thrash, using speed and volume not for their own sake, but to enhance their intricately structured compositions. All-new studio album, their first since 1997. But one thing about Metallica will forever remain unchanged – they are the biggest, greatest rock band in the world. Anger is heavy, intense, and it reaffirms Metallica’s place at the top. As drummer Lars Ulrich puts it, If you’re looking for ballads on this record, you’ll be looking for a long, long time. Features: 45rpm 180 Gram Audiophile Quality Deluxe Vinyl 4LP Box Set! Cut at Bernie Grundman Mastering Studios Mastered from the Original Analog Master Tapes! Pressed at Pallas 4-Single pocket jackets w/4 panel folder Housed in box (printed at Stoughton) Produced by Bob Rock with Hetfield, Ulrich, Hammet & Trujillo Selections: LP 1 1. Anger LP 2 1. Some Kind of Monster 2. Invisible Kid LP 3 1. Shoot Me Again 3. Sweet Amber LP 4 1. The Unnamed Feeling 2. All Within My Hands. International Buyers Please Note. FACTORY SEALED OUT OF PRINT PRODUCT is IRREPLACEABLE and therefore NOT RETURNABLE. Because of Postal Regulations in following countries — U. (England, Ireland, Wales and Scotland), SOUTH AMERICAN COUNTRIES, QATAR, PHILIPPINES, SRI LANKA, ISRAEL, RUSSIA, MEXICO and MALTA. The item “METALLICA ST ANGER RARE AUDIOPHILE COLLECTORS LIMITED EDITION 45RPM 4 LP BOXSET” is in sale since Saturday, August 29, 2020. This item is in the category “Music\Records”. The seller is “mymusicfix2″ and is located in Lake Forest, California. This item can be shipped worldwide.

Rare 1996 Warner Bros Superman. By Bowen and Timm. Made for Staff Only. 12